Helps Me Keep a Clear Head!

I teach high school students and need to keep facts and figures straight. Brain Formula really helps me keep a clear head! My thoughts are more organized; I’m more articulate and I’m able to tackle my busy and hectic day with a clear mind. It’s awesome!

Normally, I cannot hold images in my brain for more than a few seconds. After taking the Brain Formula, I was able to hold images of people and things for at least a minute, long enough to draw a good picture of it!

Use only as directed. Consult a health professional before using if you are pregnant, nursing or have a medical condition. Stop use immediately if you experience any adverse reaction.

Use only as directed. Consult a health professional before using if you are pregnant, nursing or have a medical condition. Stop use immediately if you experience any adverse reaction.

Ginkgo Biloba increases blood and oxygen flow to the brain. It has been proven to support brain health. It even increases memory capability, promotes a sense of physical and emotional well-being, enhances healthy hearing and eyesight, and supports pain management. Dr. Schulze personally witnessed the miraculous healing power of this plant in his clinic. He saw firsthand the powerful ability of Ginkgo Biloba and many other similar herbs, to increase brain circulation and function. It was a powerful and effective aid to circulatory health, positive mental attitude and many complaints related to poor circulation.

Ginkgo is 100 times more effective when mixed with CAYENNE! Cayenne increases the blood flow to your head faster and more effectively than any other herb known. This is why, when you take it, your face turns red. In the clinic, Dr. Schulze saw that the main source of his patients’ complaints was due to a lower blood flow to the affected part of their body, blocking it off from the vitality of the rest of their body. When this area became blocked or congested, health problems always moved in. The bottom line: Cayenne unblocks and brings LIFE back to the WHOLE body. Dr. Schulze used Ginkgo Biloba in his clinic for years and saw good results, but it wasn’t until he mixed it with Cayenne Pepper that he saw the real healing power of Ginkgo Biloba, and what this miracle herb could do for the brain.

The brain, just like any organ, needs to assimilate nutrition, and then eliminate waste. When the brain gets backed up, this blockage and subsequent build-up of waste, toxins, sludge, schmutz, goo, plaque, whatever you want to call it, causes your brain to get congested, which can then cause a thousand issues. 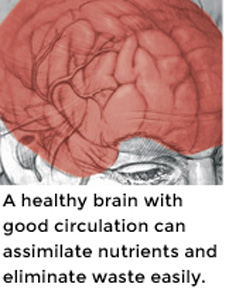